Sharon works for the Chicago Police Department, it’s a hard job that has meant hard decisions, including busting her own father for domestic violence ten years previously. Although she knows she did the right thing (her parents are to renew their wedding vows) it has led her to estrangement from her family, disillusionment about her life and a sense of sang froid about emotional entanglements. When a stranger, Catch, saves her from having her head blown off by a disgruntled gang member who has already let two rounds off into her jacketed chest it looks as though perhaps the two of them can make a go of it. But Catch has his demons too; he spends his days walking around the city helping unappreciative people without looking to help himself, he has shut out his past and lives his life in a barren room. The bond that is tentatively growing between them is rendered fragile by the grip of the past, a past that unites them as much as it keeps them apart. 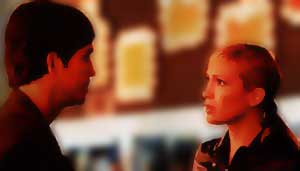 The central male may well wander the streets of a major American city helping people and moping about in a trench-coat agonising about a past he is trying to erase or atone for, but this is no Buffy spin-off, despite the occasional “head down in a dingy alley” shots. No instead Angel Eyes is one of those heart-wrenching tales of two traumatised souls requiring redemption from themselves and absolution for moments in their lives that have permanently scarred them. Both are incapable of tears; Sharon by out-drinking her buddies and beating up criminals and Catch by his “angel of mercy” routine that sees him perform such deeds as turning off car headlights to save their battery (the owners naturally thinks he’s going to nick it) or rescuing stray dogs. As the film progresses he weans off the Samaritan bit, gets a little bit better at shaving and finally starts the nightmare of sorting out his pad with flat-pack furniture, while she tries to confront her fear of her oafish father, while curtailing the temper that she has inherited from him. But all this is futile – this is a film where people trying to do the right thing or victims get psychologically traumatised or abused while the perpetrators walk around unscathed and unchallenged.

Rather like Sweet November the outcome is perhaps not entirely as you would anticipate and better for it but ultimately Angel Eyes comes burdened with a number of issues that renders it average at best. Lopez gives a fine central performance (as indeed does everyone else, the acting is believable throughout) especially when in gutsy “Dirty Harriet” mould, but the whole tale is wallows in everyone’s self-misery to such an extent that it’s hard to care that much. Her family hate her for being a cop but she doesn’t confront the very thing that makes her that cop, as Catch points out “Do you ever think about how many people are walking around this town because you saved them?” He fares little better while virtually everyone incidental in the picture (with the exception of the virtually abandoned little boy who lives down the hall from Catch and Sharon’s long suffering police partner) are selfish people living miserable self-centred lives. Now it’s not that life is a bed of roses or anything, but the sheer turgid futility of it all gets wearisome so that by the time you finally reach a scene of any emotional content you are too numb to respond. This linked with the very opening scene justifying some co-incidental bond between Sharon and Catch at the very moment of loss to him seems a trite device that isn’t required for their relationship to progress. This is a shame as at least the film-makers are trying to create a romance out of the squalor and psychological damage of modern life, but in the end its claustrophobic structure offers little beyond the miserable lives it portrays. See it on telly when you need the comfort of watching people more screwed up than yourself because frankly Angel Eyes is the anethema of enjoyment.