More a dog of a film than a cat. 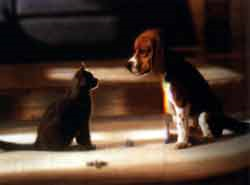 Cats & Dogs (2001)For thousands of years they have been fighting. Of course as mere humans you’d only know the surface of it; dogs don’t like cats – cats don’t like dogs. Until now the balance has been even but that could all change and the scales are set to tip in favour of the dogs all thanks to the blindingly daft research carried out by Prof. Brody at his family home. Brody is working on a drug to make dog allergies a thing of the past, a move that will mean a dog in every household and the complete subjugation of feline kind. In order to protect their interests those cunning canines have appointed a highly trained field-operative to protect the developing formula from the clutching paws of their fur-ball making adversaries – appointed but instead got Louie, a clumsy but enthusiastic puppy. Meanwhile, in his mansion home, top cat Mr Tinkles is dispatching his best international agents to thwart the poochy plans once and fur all. Oh, and take over the world of course…

Cats & Dogs (2001)It must have seemed like a good idea at the time and, to be fair, Cats and Dogs is at least mildly amusing, but sadly the execution doesn’t live up to the concept or the hype. At least its 87 minute running time means that it doesn’t outstay its welcome but this comes at the expense of what appears to be a number of gaps in the film, gaps that were they filled would probably hold back the pace (a prime example of this is the sudden lurch from pre to post “soccer” trials that would help the later kidnap attempt by Mr Tinkles to work dramatically but would slow the action considerably – so presumably out it went). And at least pace is in its favour with plenty of choppy editing and orchestral oom-pahing to drive everything forward. The editing also does a reasonable job of hiding the occasionally ropey effects and gives the film much of its live action cartoon fun. Sadly though this is not enough as the net result is that of a rushed film (see also Planet of the Apes), a film that needed to cash in on the summer holiday box office spree instead of polishing the edges for a Christmas release.

It’s not all bad though, at least it’s sporadically amusing and the world domination plan suitably insane in its ingenuity but clearly the mutt-centric nature of it makes it less balanced than the advertising would lead you to believe. Despite this pooch bias the cats are most definitely the stars of the show as the dog heroes are just sooooo dull and serious (the vaguely interesting one is also the only female, but her homeless character is sidelined and virtually edited out of the picture – one for the boy dogs then, all of whom have homes to go to after their heroics). Jeff Goldblum’s dumb scientist routine has been “enhanced” by apparently swallowing too many Rick Moranis pills, taking things down another notch.

Cats and Dogs is a missed opportunity of a film – there is enough there to enjoy but given the high cost of production these days surely just a little more time and effort could have been put in to make it a finished film.

Alice The Cat On Cats And Dogs

We asked Alice the Cat to give her inimitable précis of the film. Be warned though, some of her views are quite controversial. Views expressed by Alice do not necessarily reflect those of Colin and Mitch.

Guterman’s Cats and Dogs represents republican Bush-ian ideology in the guise of a family film, re-emphasising concerns about international diplomacy, a paranoia about non-US-centric policies and a reaffirmation of the capitalist ethos. In a Hollywood system that is generally seen as fiscally republican but artistically democrat Cats and Dogs plants both its paws soundly in the Bush camp. The film shows dogs as the heroes of this world order; all American, all willing to obey orders without questioning, all male. All female dogs are strays – it is a phallocentric dictatorship hiding under the guise of patriotism. The misguided need to protect humanity is just misdirection to justify a heinous goal – the dominance over another species. That only male American dogs are seen as capable of upholding international law and making monumental decisions is shown in the canine UN sequence – all the other countries’ dogs are ineffectual and bickering, leaving it to US hounds to unilaterally dismiss international diplomacy in order to have their way. The cats, on the other hand, are shown as a desperate band of multi-nationals under the strategic leadership of Mr Tinkles. The international nature of the feline resistance is not shown in the film’s mise en scene as a positive collaboration but as a Stalinist attack on the dog democracy (a democracy providing you comply), whilst providing racial targets for the film to exploit; Russian cats are hardened KGB brutes, Japanese cats are ninjas with, paradoxically, Chinese martial arts skills and so on. The implication is clear – do not trust foreigners.

Technologically the film correlates the power of money with patriotism and security. The dogs have the finest military hardware imaginable, huge computers, tracking devices, radar, underground war rooms, networks of cameras, advanced communications facilities on so on while the cats are burdened with outdated equipment and a reliance on personal ability over financial backing. Normally a film sides with (for want of a better term) the underdogs overcoming adversity, the ‘against all odds’ scenario, but Cats and Dogs revels in the glory of technological supremacy and rewards its canine protagonists for being rich and selfish. Rather than side with the brave rebels valiantly fighting the rich, regulated empire that threatens to homogenise the universe (the Star Wars film scenario) we side with the oppressors that stamp on politically diverse ideals in order to maintain world order at the expense of individuality (the Son of Star Wars project scenario). Art and ingenuity, creativity to overcome adversity, these are not ideals preached by Cats and Dogs – the temple of hard cash, the dollar, is the films idol that we are meant to bow to. The message is: if you are poor and oppressed it is because you deserve to be.

Cats and Dogs is reactionary canine propaganda that purports to be family entertainment. Instead it is insidious indoctrination into proto-fascism; installing consumer greed-capitalism and cultural imperialism in order to homogenise a world under the yoke of syndicated supremacy. Don’t be fooled. Cats Rule.