“Do it for the animals”

Fame has its price. 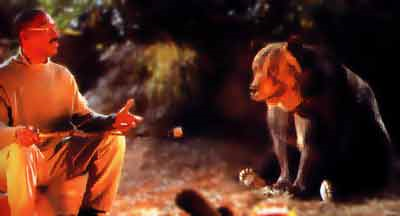 Animal chatterer Doolittle is constantly besieged by the media and by any creature with an ailment to alleviate, the result of which is a decline in his esteem where it counts the most – back home. His daughter has just turned sixteen, dates the Domino’s pizza boy and can only be reached on her cell-phone – that’s even when she’s in the house. His wife is getting tired of the whole animal thing and even the new pet chameleon is having trouble blending in, if you catch my drift. To add to his woes local not-the-Mafia-at-all big cheese The Beaver (a, wait for it, beaver) has requested an audience. The Beaver’s request is simple – save their forest home from the evil lumber corporation. Doolittle is the only man for the job, even if it means cancelling the family tour of Europe. But how can one man stand up to the might of a huge corporation with Republican backing? The solution seems trivial, get two endangered bears to mate in the forest, hence halting the development plans. Trouble is there’s only one bear there so it’s down to Doolittle to convince performing city-bear Archie to brush up on his charm and survival skills in order to woo the girl (not an easy task as Ava, the girl in question, points out categorically that “I don’t talk to bear pimps”) and save the day. A tall order as Archie’s skills seem to consist only of poor karaoke and limited co-ordination.

Dr Doolittle 2 (2001)Another sequel for the currently prolific Eddie Murphy (although less said about Nutty Professor 2: The Klumps the better) Dr Doolittle 2 sees him reprise his updating of the perennial character who can “talk to the animals”, replacing Rex Harrison’s studio crippling Edwardian with a contemporaneous version that is surprisingly old fashioned in his own personal moral outlook. Whatever the proliferation of excrement and mating gags may suggest Dr Doolittle 2’s driving themes are those of parental concerns about their offspring and the harmful effects of capitalism on the environment. The latter theme could not be more timely in the light of the Bush administration’s rejection of the Kyoto agreement for Dr Doolittle 2 works as a plea for American democratic environmentalism, indeed the twin enemies of the film are a capitalist and a republican (“I took on the democrats, I can take on a bunch of animals”). That Doolittle himself is having a hard time coming to terms with his daughter’s burgeoning sexuality (a point that Mrs D doesn’t seem to address at all, although she does take issue with her husband’s “walk the walk, talk the alpha male talk” chat with a downcast Archie) makes his character a comforting conservative. This is necessary because we need to relate to his inherent human-ness as most of his on-screen interaction occurs with the anthropomorphised animals. Murphy’s generosity as an actor shows, he may have his name before the credits but it is plain that he is straight man to the considerable number of animal leads (indeed the film itself is narrated not by Doolittle but by his dog Lucky). Rather like Babe these animals are not exaggerated in their looks but in their mannerisms, superbly realised by special effects that make the whole thing look effortlessly natural. There’s the drunk French monkey back from part one, as well as new beasts ranging from wolves through to bees and even a squadron of guano-dropping bomber pigeons. Where the film lacks however is in the comedy department; there are a number of chuckles along the way but the belly laughs are notable by their absence. That said matters do pick up considerably towards the film’s animal revolt climax but it’s too little, too late. Dr Doolittle 2 does, as its name suggests, little but is a satisfactory time diverter. If only they had paid as much attention to the script as to the effects it could have been a whole different story.