Written and Directed by Deborah Kaplan and Harry Elfont 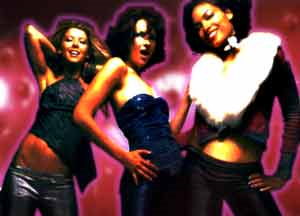 Please don’t cry girls, we know this must be a terrible, terrible shock but top boyband DUjour – famous for their hit single “Back door lover” – have disappeared, presumed dead, in a plane crash. All is not lost though because their anthology CD collection comes out tomorrow and DUjour’s top manager Wyatt Frame is already on the look out for the next big thing on behalf of Megarecords’ head Fiona.

eanwhile in Riverdale aspiring popstars The Pussycats are receiving a less than enthusiastic response to their bowling alley concert or their impromptu busk outside of a local fashion store. As luck would have it they bump into Wyatt who, desperate for anything even resembling a band, signs them up for mega-stardom – launching them as Josie and the Pussycats to an adoring youth market. But are Wyatt and Fiona’s plans for the girls more sinister than just huge record sales? With plans for a global web-wide broadcast of Josie and the Pussycat’s first stadium concert looming and a saturation marketing of 3-D sound pussycat ears to indoctrinate the nation into consumer overload what chance is there of a happy outcome for the three plucky popsters? Oh come on…

Introducing Josie on guitar and vocals, Josie and the PussycatsValerie on bass guitar and, taking the drums, Melody. They are The Pussycats, stars of the anodyne Archie comic strip and lacklustre Hanna/Barbera cartoon series, now given the big screen treatment to a new generation. The very thought, it must be said, does not inspire confidence – especially in this age of “sassy” kids and designer boy-bands. But hold on a mo, for Josie and the Pussycats puts on a fresh lick of post-modern paint and emerges as quite the bubbliest comedy of the summer – it may not be big, it may not be clever but it is a whole lotta fun. Key to this is the band itself; unlike their predecessors DUjour, The Pussycats are there as friends first and, crucially, they play a whole lot of better music. Then there is the ever-dependable Alan Cummings as sneaky Wyatt Frame proving definitively (along with this year’s fantastic Spy Kids) that he is the finest actor working in big-screen pantomime. Even if the supporting actors are less rounded they at least are given grounds for being there, as one character points out “I’m here because I was in the comic book.”

Rather like Lara Croft Tomb Raider there is an abundance of “ironic” product placement on show but in this case it is entirely in keeping with the film’s emphasis on marketing trends and products by subliminal advertising – the pacifying of the consumer through media manipulation as so memorably portrayed in John Carpenter ‘s They Live (and they even manage to get a clothesline wrestling manoeuvre in here as well!). Thus when dippy-hippy Melanie (who gets an urge for a Big Mac after short exposure to subliminal messaging despite the fact she is a vegetarian) is showering, the whole bathroom, sponges, shower-screens etc are daubed in McDonalds placements to the point of (deliberate) absurdity.

Evil cackling laughs, diabolical plans, retro costuming and some well designed editing make this the finest girl-band picture since Beyond the Valley of the Dolls (another film whose band actually played decent pop music). It ain’t art but it’s highly (if unexpectedly) recommended.