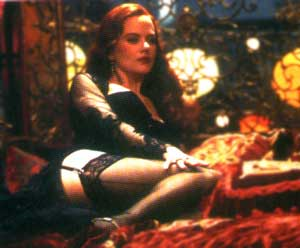 Moulin Rouge (2001)Christian is a writer, a dreamer with a passion for love. Well it would be a passion if he’d actually experienced love, he’s pretty sure of that. And where better to experience love than in gay Paris? Where better than the Bohemian quarters of Montmartre and the decadent Moulin Rouge? For the struggling scribe there can be no other place; he has found a group of dissident artist revolutionaries led by Toulouse Lautrec from whom he can gain strength and, more than that, he has found his heart’s desire. Her name is Satine, sultry courtesan of the Moulin Rouge, a dancer, an actress, the object of men’s desires… for a price. Christian can’t afford the price but the moustached Duke can and is willing to pay handsomely for the privilege of possessing Satine, even if it means having to fund the Moulin Rouge itself…

Prolific is perhaps not a tag that one associates with Baz Luhrmann, his charming romantic fairy-tale comedy Strictly Ballroom launched him onto the world stage in 1993. Its follow up, Romeo And Juliet, was an audacious re-mix of Shakespeare that established him as a box-office talent to watch, not least because of perfect timed casting of Leonardo di Caprio at the pinnacle of his teen popularity combined with superb use of editing, cinematography and sound. It’s with some trepidation then that one approaches Moulin Rouge – the hype has been on full blast for ages, that wretched single has been polluting the airwaves and the buzz from Cannes has made it the film to see this autumn. And with good reason for Moulin Rouge is the film to have seen, even if you detest every gorgeous shot of it.

The first thing you need to know is that Moulin Rouge is a musical; the characters sing dialogue to each other, there are dance sequences that would be disruptive in any other genre and a total absence of any realism. The first half an hour alone is so breathtaking you may wish to leave the cinema for air. It’s faster than any action flick you care to mention and louder too – a sheer cacophony of picture and sound, impressionistic blurs of colourful skirts, explosions of dance, flesh, neon, blue-grey skies, impossible crane shots, grotesque faces, bleeding colours all vie for your attention. It’s one of the few examples of a film being more hectic than its trailer!

Early on in the proceedings, when Christian has joined Lautrec’s gang following his encounter with a narcoleptic Argentinean, our hero is given his first taste of absinthe. The effect of this most notorious (and very tasty!) of alcoholic beverages, is to have the lady of the bottle in all her seductive green glory emerge from the label and sprinkle the throng with fairy-dust while gyrating in dreamy abandon. For the film it is as though the whole two hours is steeped in this drink of madness; Day-Glo Fellini with the mad ringmaster Harold Zidler, Ken Russell films a turn of the century Velvet Goldmine or a Pierre et Gilles come to life from the imagination of George Cukor. To some (can’t you take your drink?) this will be too much, too mad, too bright and too loud. And, make no bones about it, this is a loud film with big emotions, big tragedies and big camerawork. The songs are mainly contemporary but are orchestrated and jumbled together to create a patchwork post-modern musical. The effect is strangely coherent despite the plethora of interlocking lyrics from some of the cheesiest, most saccharine pop songs known – it all somehow works.

Kitsch, dizzying, audacious, tragic, comic and just breathtaking Moulin Rouge is an unforgettable experience whether you love it or loathe it. But do we have to wait so long for the next one Baz?