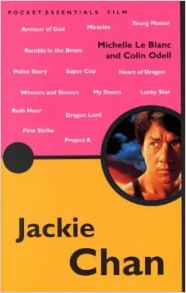 Most people associate Jackie Chan with the smash hit films Rush Hour and Rumble in the Bronx, but there is a lot more of his work to see. Jackie learned his trade from the harsh world of Peking Opera School and began to appear in films as a child. He slowly progressed from minor roles to becoming a head stuntman and eventually lead actor in a number of kung fu movies in the 1970s. It was only when he began to direct his own films that the real Jackie Chan film was born. This book looks at his life and career, reviews and analyses his films, and provides references for further study. Buy
PinFacebookTweet
← Pocket Essential Tim Burton Pocket Essential Horror Films →