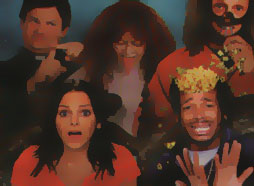 Scary Movie 2 (2001)Kane House, a creepy mansion with a horrific, gut wrenching past of murder, deceit and demonic happenings, a house known as Hell House (Thunder cracks etc)! Who would be brave enough, nay, who would be stupid enough to spend the night in a house like this? Cindy and her vacuum brained friends, that’s who, hyped up on a guaranteed A-Grade result in their new college if they reside there as part of Prof. Oldmans not-to-clear experiments in insomnia and the results of the supernatural. Oh that and the Prof. gets to ogle the girls showering once in a while. Soon though the group is haunted by ghostly visitations and the house itself seems hell bent on insuring that nobody gets out alive or gets out a virgin.

The inexplicable gross’s for last years gross horror parody Scary Movie meant the promised “No sequel” guarantee was as sound as the gags. Rushed into production we now face the unenviable task of approaching Scary Movie 2, another film with a tag-line that screams baloney for there are not more laughs (it ranks in at about one chuckle per hour, not good in a sub 90 minute comedy), there are not more scares (it’s less gore&scare-based than its predecessor and even the semen showers have been reduced to Ambrosia custard style splats) and there are not less clothes either. As though running scared from the excesses of the first this doesn’t even follow the sequel rule that the second should feature more elaborate pieces and out gross the first in content. Instead we get a watered down rehash of the gags in the first film, lots of sex gags, lots of urine gags and plenty of opportunity to “laugh uproariously” at the disabled (the bad-guy has a deformed hand – ha ha ha, and there’s a bloke in a wheelchair that we can ply with gags about standing up – oh the mirth) and gay (he rapes a possessed clowns doll after first strangling it with his ginormous penis – ha ha ha).

Ditching the Scream premise of part one (a comedy version of a parody was never going to be too good a concept anyway) Scary Movie 2 instead sights its targets firmly at taking the piss out of The Haunting and House on Haunted Hill. Now having a dig at Jan de Bont’s bloated turkey (don’t think for a second that this film is going to even consider the original version) is like hunting dead fowl; no sport, tasteless and dull. It does such a good job of making an arse of itself why bother? The point is there is not enough mileage in all this to get the way through 80 minutes so we are also “treated” to a prologue send-up of The Exorcist (fresh in the mind after a cinematic re-issue, as if Repossessed wasn’t enough to put people off of the idea) to make up the time. The sight of James Woods dressed as a priest responding to the possessed girls demands of “fuck me” before engaging in a three way vomiting contest is not a pretty one, nor for that matter original or funny. Adding further embarrassment Tim Curry, sadly indicating that perhaps Charlie’s Angels was indeed but a glorious blip on his recent career, manages the Hurculean task of performing even worse than he did in the second Lexx movie. And so on. In place of last years Matrix-style fight we get a Charlie’s Angels-style fight, there’s a repeat of the projectile-cum from part one but it’s not even in the context of parody and the reefer jokes reach their nadir when a possessed grass plant rolls up Shorty in his bedclothes and smokes him. About the only points of any merit (and we are clutching big time) are a brief explanation as to the fate of the missing Florida ballot papers and Mr Kittles, a very territorial cat who uses his paws of furry to exact savage martial arts vengeance on Cindy for her use of his personal litter tray. And quite right too.

There is nothing wrong with gross humour (take John Waters) or lack of taste (take Ken Russell) but Scary Movie 2 shows such a meanness of spirit whilst pandering to its profit-friendly R-rating (no rocking the boat boys) that it leaves more than a nasty taste. Avoid, and remember: Sometimes we watch ’em so you don’t have to.