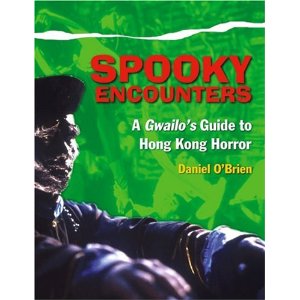 Bitesize: A spiritually uplifting tome, but not in the self-help sense. . .

As is generally the case the world over, the horror genre (bar a few tentative steps into the field by the big studios) lies in the realm of the low to mid budget film aimed predominantly at a young audience. Hong Kong horror is no different in that respect and, as elsewhere, there are genuine classics to be found and many guilty pleasures to enjoy. O’Brien’s book is subtitled A Gwailo’s Guide to Hong Kong Horror, a neat way of distancing himself from cultural snobbery and playing on the meaning of gwailo – both literally as “white ghost” and as a less than complimentary way of referring to white non-Chinese people.

This guide serves as a road-map and introduction to this oft-neglected genre, often playing poor third in Western analysis to the gunplay or martial arts film (it jostles with the more exotic wu xia pian and the neglected analysis of non-martial arts comedies and a substantial body of dramas) and is a welcome addition to the growing library of books about Hong Kong cinema. O’Brien places the popularity of the modern Hong Kong horror at the feet of two men: Sammo Hung Kam Bo and Tsui Hark (although his analysis of Ching Tsu-Tung’s work as happy journeyman is perhaps a little harsh).

Sammo Hung’s Spooky Encounters is viewed as the film that launched the resurgence in the genre (Tsui Hark’s We’re Going To Eat You and the rationalised but bizarre The Butterfly Murders did little to pique public interest at the time) and is undoubtedly a classic – a breathless blend of comedy, horror and martial arts as our fearless hero (director/star Hung) encounters spooky apparitions from the netherworld. The conclusion comprising altar-building and possession by gods is one of the highlights of Hong Kong cinema.

O’Brien is less enthusiastic about the Wu Ma classic The Dead and the Deadly but points to the film that launched the genre into the stratosphere as the peerless Mr Vampire. A whole chapter is devoted to the vampire film, both the more traditional Chinese hopping style and those imported from the European model (looking back to the enjoyable schlock of the Shaw Brothers/Hammer co-production The Legend of the Seven Golden Vampires) – it is testament to the popularity of the genre that he cannot even hope to be all inclusive.

All in all a comprehensive overview but one that has an inherent problem facing any potential book and its relationship with the reader – on one hand while the author’s enthusiasm and descriptions make you yearn to see the films, the very process of breaking down the events and plots can remove the element of surprise. O’Brien aims his book at those already familiar with the horror genre as a whole but who are new to its Hong Kong inceptions. There are many references, particularly to European horror films, so the prospective viewer can have a familiar angle with which to view the films. In some cases this is helpful, in others perhaps inappropriate. There is a tendency to anglicise certain areas of distaste in aspects of the Hong Kong film, particularly in regard to the casual abuse of animals, something that the oft lauded Italian horror industry was not adverse to (the cuts in Argento’s Deep Red and Inferno imposed in the UK, for example, don’t relate to the murders of people but the abuse of animals) and in the often tasteless misogyny. While this is, in many respects, understandable and worth pointing out to unsuspecting viewers it does occasionally feel like moralising.

However this is, in the main, a useful guide to Hong Kong horror, pointing out the best, worst and most under-rated entries in the genre complemented by a broad overview of the talent involved with their making and trends in consumer acceptance.

Any Cop?: Very useful to have to hand when the temptation to shop on-line for oriental oddities takes hold and doesn’t let go, like the skeletal hand of a thousand year old ghost. Spooky!

PinFacebookTweet
← Sunshine on Putty: The Golden Age of British Comedy from Big Night Out to The Office – Ben Thompson The Hollywood Dodo – Geoff Nicholson →