Home » OldThings » Bookmunch » Sunshine on Putty: The Golden Age of British Comedy from Big Night Out to The Office – Ben Thompson

Sunshine on Putty: The Golden Age of British Comedy from Big Night Out to The Office – Ben Thompson 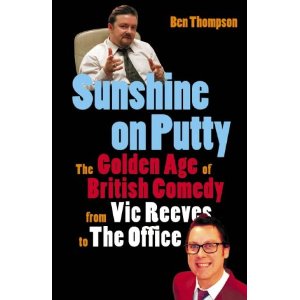 If ever there was a book with a confrontational title then this is it. Sunshine on Putty. Do what? This proves to be a tag that is explained, somewhat tangentially, at the book’s opening and closing pages but reveals (to the casual browser) exactly nothing about the contents.

The “Golden Age of British Comedy” is a well-used expression but when accompanied by the “from The Big Night Out to The Office” you may want to question the author’s sanity. After all, while the titles mentioned are undoubtedly members of the comedy elite, the suggestion that the last decade or so of British comedy is in any way a Golden Age is one that should be approached with a degree of scepticism. This is, you will no doubt recall, the era of My Hero, Mr Bean and the heretical Legacy of Reginald Perrin. The fact that the later title looks back to a perceived ‘other’ Golden Age, the 1970’s, initially seems to be symptomatic of British comedy’s demise in the face of the horrible 22-episode-per-season barrage of the US committee sitcom. The crucial part of the argument for the 70’s sitcom is that they were in some senses universal, appealing to a wider audience cross section than the 100+ channel specialisation of the satellite era could hope for.

However Thompson’s arguments for a renaissance are generally not reserved for BBC1/ITV sitcoms such as My Family, but more for cult material likely to be seen post-watershed on BBC2 or Channel 4 (the focus on those broadcast on the mainstream terrestrial channels were often a result of their success – the move of The Office from BBC2 to BBC1 a case in point). Within this framework Thompson is on far less rocky ground and by skimping over more mainstream fare he can concentrate on backing up his argument. Basically the thrust is that modern comedy, as instigated by The Big Night Out is a healthy backlash from the ‘right-on’ alternative comedy of the Thatcher era (for which the ‘splitter’ Ben Elton receives much vitriol – from Labour to… well, New Labour) imbuing variety acts with a sense of post-modernism and surrealism. Max Wall, Peter Cook and to some extent the Monty Python team are partly identified as the parents of this new breed.

The approach is essentially chronological and based on numerous interviews conducted by the author over the years. The development (and development hells) of the shows are covered, along with the audience reactions. Reeves and Mortimer are viewed as a barometer throughout these turbulent years as their various projects fluctuated wildly in terms of success. Similarly the tone changes from adulation to impartial with Thompson considering, for example, not only the genius of media terrorist Chris Morris, but also the pitfalls of his comic methods and bizarrely his middle ground status between Ali G and Noel’s House Party… Thompson backs up his premise for the main, and makes you realise how good modern comedy has been. This is no mean feat as much of the material is still fresh; the benefit of hindsight allows you to edit out the unfortunate ‘also rans’.

It’s a tightrope act that holds well despite some shaky moments – there are too many footnotes and some of the internal gags fall as flat as the ton of invisible lead soup (the ‘heavy electricity’ as described in Brass Eye). Overall though it makes for a both a good read and a valuable record of the alternative-alternative-comedy of the 1990’s.

Any Cop?: An interesting examination of TV-land’s not so distant comic heritage.