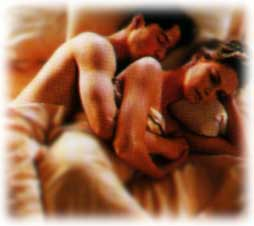 Nelson is your bog standard advertising guy, you know the sort; 24:7 job, aggressive in the most mundane of dealings, pile of TVs to the roof and his own personal treadmill to watch those calories. Then there’s whats-er-name, erm, Angelica – she gets the ‘benefit’ of his morning sexual exploits whilst having to put up with him simultaneously working out jingles for Dr Diggity Dogs. As fate would have it Nelson needs to complete his driving test exam where he meets Sarah. In fact he gets her thrown out for cheating when all along it was he who needed the help. You would think she’d be mad at this but instead she tries a different tact by hounding him to be her next live-in. Sarah’s live-in’s are well known in the neighbourhood; she tends to their every whim and sorts out their problems, the only stipulation being that they stay with her one month “no more, no less, no work.” Nelson doesn’t think he has a problem but he does and it ain’t just the fact that he loses his job and whats-er-name in the same day, his problem is he is a self-centred arse. Of course what he needs is quirky vegan Sarah and her wacky friends, love of dogs and joie de vivre but will he last the whole of November in such unusual surroundings? And what are Sarah’s motives for this philanthropic lifestyle with a different partner every month?

Keanu Reeves in romantic film shocker! The story of a callous emotionless businessman turned gooey (after a set of trials and tribulations) for a wild child of nature who exasperates him, bemuses him and wins him over is hardly new, but is adequately handled in this slight but amiable film. Reeves is at his best playing the one-dimensional advertising guy with a ruthless streak (he suggests sexual advertising for wholesome family hot-dogs, he pays people off because it’s less hassle) because of its single focus and resolve. When his world turns upside down we empathise with his previously loathsome persona because we have to adapt to his change of circumstances too. Their month long affair starts with sex but slowly becomes more to Nelson as he confronts his upbringing, his life and his relationship with people other than himself. So, surprise! yuppie ad man finds humility, helps under-privileged children and discovers he has a heart. Ahhhh. And what’s more Sarah finds the initially bad choice in “November” (Napoleon’s month) is actually a rather good one. Now at this point it could all go to mush – we’ve already met the Scottish “shock secret” neighbour Chaz, Ernie the puppy saved from experimentation in a dangerous raid where Nelson was the unwitting getaway driver and the delightful shop owners who give away free produce to nice people, but fortunately Sweet November doesn’t throw away its convictions in the traditionally disappointing final reel. Instead of tragedy or saccharine we instead get an ending that is appropriate to the tale, as noted by the unsubtle lighting changes that accompany the autumnal conclusion.

Although slight Sweet November is a reasonable way to pass the time; a bit romantic, the odd chuckle, fashionably democratic morality and the odd sniff. Not a real weepy, not a real rom-com but at least it has the conviction to see it through. Rent the vid for a rainy day when you don’t fancy anything smart, stupid or violent.