Home » OldThings » C&McomFilmReviews » The Fast and the Furious (2001) 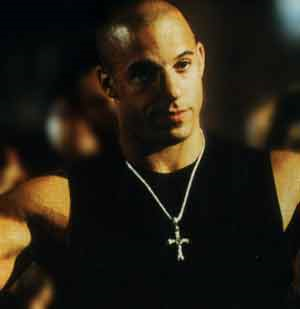 The Fast and the Furious (2001)The world of underground illegal car racing. Engines get souped up, NOS is the injected high of choice and speed is the name of the game. Head of the game is Dominic (he’s got a last name but he can’t pronounce it). Pretender to the crown is Brian, new kid on the block with a car to his name and little cash. Brian is roundly defeated in a street race and forfeits his car, a car Dominic would be happy to use were it not for the bullet holes that riddle its surface prior to the NOS tanks exploding – a wake up call from rival driver Johnny Tran. Still it means Brian is now a more acceptable face in the Dominic camp but perhaps falling for Dominic’s sister is not a sensible thing to do. Still with the big money desert based Race Wars on the horizon and a devil may care gang of truck robbers on the loose Brian’s got a lot on his mind.

A mainly male testosterone fuelled world where the thrill of the sport is all and the financing of the sport comes from daring heists. A world where to be accepted means to have no fear. Not a world for an undercover cop. Sound familiar? Swap surfing for car racing and banks for trucks and voila, Point Break with wheels. In a Summer filled with average blockbusters The Fast and the Furious proved to be the mid-budget sleeper hit due to strong word of mouth and an easy-win combination of cars, chicks and thrills. Certainly when viewed bumper-to-bumper with last years terminally tedious Gone In Sixty Seconds The Fast and the Furious leaves its higher profile brethren struggling to get into second gear. It’s not big, it’s not clever but it is solid, undemanding entertainment that is sporadically exhilarating in a way few recent car chase movies have managed. The first race between (among others) Brian and Dominic is a case in point; the camera judders at the speed, cars are sharply focussed against a blur of background colour, the straining of the engines, the need to win, the NOS adrenaline injection rush of speed. After this the film tries to live up to this narratively simplistic but brilliantly executed scene but never quite gets there, like poor ADD addled Jessie it’s a case of reaching for the nitro button too soon and hitting the finishing line fast, but not fast enough. The rest of the film, even the obligatory (and faintly dispointing) climax, never reaches the same heights as what is effectively a sport rather than the life-or-death situations to come. Chief though among the films niggles are the truck heists that provide the raison d’être for Brian’s undercover work – they just don’t feel plausible in the way that, say, the Ex-President’s bank robbing escapades do. Instead an insane combination of harpoons and jumping onto moving trucks is their modus operandi. Barking. Also, despite the grudges, the races, the crimes and the Uzi’s matters seem a lot less dangerous than they could, but these are minor nit-picks.

Even though the screen at times appears hosed down in industrial strength testosterone (there’s one token female driver, the rest are there purely to wear tight tops and drape on the arms of winners) the basic nature and straight-faced earnestness of the proceedings make for great undemanding viewing. Its well shot, pacey, the acting’s better than you could rightly expect a no brainer to be (again c.f. Gone In Sixty Seconds) and the pounding techno/thrash soundtrack makes sure that the rear speakers get a decent airing. It may well be more accurately described as The Quick and the Miffed but then again hyperbole has never hurt marketing a film.