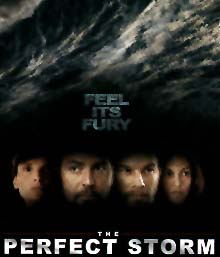 The Perfect Storm (2000)All assassins are eventually faced with the “just one final job” scenario that provides the basis for a nightmare last mission. The Perfect Storm is like that but with fisherman and in this instance based upon fact. How much of this is realism and how much is Hollywood watering down (if you’ll forgive the pun) is unlikely to come out in the wash, but Peterson’s film has enough earnestness about it to touch home. Sadly it falls into a number of Apollo 13 style “chicks back home and the kids they left behind” sequences, but that is to be expected in the circumstances. Perhaps there is a bit too much of the “extreme character” traits that set up tensions within the crew that clearly wouldn’t have made such a treacherous voyage work. The worthiness demands a slow build up to the inevitable storm and for the main it works – establishing relationships showing the previous voyage of the crew and setting up portents. The motivating circumstances for the tragedy are all based on greed, either to ‘make ends meet” in the shape of the shiphands denied a decent wage because of their previous meagre catch, but also in their land lubber ship owner who skimps on adequate equipment to save a few more dollars. His lack of concern provides the film with its only human villain. Ultimately the crew decide to risk the storm because of a faulty icemaker which would render their catch worthless should they wait for it to subside.

The scenes of boat life are very well executed, Peterson’s Das Boot presumably making him the obvious choice of director and generally the cast handle their roles well. Clooney certainly looks the part as the Skipper – a man who loves the sea as his home. The storm too is horrendous and enveloping, with ILM providing some astonishing work. All fine and well but there are faults to this that buffer the overall effect. Firstly the aforementioned Apollo 13 style “women back home’ which while believable, does break the tension. Then there is the lack of focus that epitomised Das Boot, it would be a brave film that featured just six men on a boat but Peterson could’ve done it. Instead we get a pointless subplot about a yacht manned by a stupid old geezer that might well provide background to the abortive rescue and helicopter loss but cuts attention away from the main plot. It could be by concentrating on the rescue proccss you could relate to the cross cutting of the fishermen and their would-be saviours but instead it comes across as an excuse to show some impressive special effects – something the rest of the film uses as necessity not of spectacle. The biggest fault lays with Jack Horner’s totally gratuitous score that inappropriately punctuates the action (hence misdirecting the audience from the tension) or seems to have crept in from a different film altogether. In the final tally though the odds come out far more in favour than against, the final scenes are genuinely moving. You can almost guess the final shot from viewing the opening one that bookends the film with grim inevitability, but this doesn’t do anything to reduce the poignancy of it all.