Behind the Mask of the Horror Actor – Doug Bradley 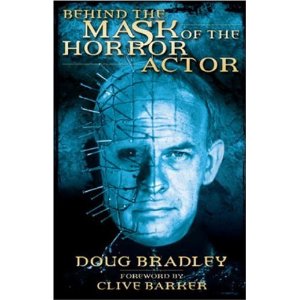 Bitesize: An illustrated guide to the faces behind the monsters’ masks and the people who made them.

Doug Bradley has a face you’ll recognise instantly… but it’s not his day-to-day one, not the one he was born with. No, Doug is famous the world over for being the main Cenobite, eventually named Pinhead, in the Hellraiser series of films; his scar-etched head emphasised by equidistant nails hammered in at every ill-healed intersection.

In 1993 he toured with a lecture on the role of the masked horror actor and expanded this into book form now, revised, in its present paperback incarnation. Rather than launch straight into his own experiences he takes us from the pre-historic wall paintings in the Cave of les Trois Freres, France, through the role of the mask in Greek plays and the traditions of Japanese theatre.

The mask then has a powerful history in human representation – cinema is but the most prominent recent manifestation of this. Narrative cinema’s love of the monster goes back to the late 19th century. Bradley follows films adaptation of stage make-up through early silents, the generally unsung work of Cecil Holland and to cinema’s first major masked star – Lon Chaney. The “Man of a Thousand Faces” applied and developed his own make-up in countless movies, torturing and contorting his body to produce silent Hollywood’s most memorable characters; the Hunchback of Notre Dame, The Phantom of the Opera and the grotesque canine toothed vampire of London After Midnight.

Although not exclusively the case, the majority of masked actors after Chaney relied on the increasingly inventive work of the make-up artist. Bradley follows the major players (Karloff, Christopher Lee, the only occasionally made-up Vincent Price), along with some welcome but perhaps less expected masked actors, particularly Jean Marais who played the beast in Jean Cocteau’s superlative La belle et la bête (1946).

The rise of the modern horror (as it has now become – as is rightly pointed out the term “horror film” was not used early in cinema history, normally referred to as “Thrill Picture”) – and the franchise of the modern monster movie takes up the final section of the book, following the careers of Gunner Hansen (Leatherface, among others) and Robert Englund (Freddy Krueger, among others) as well as the actors behind Michael Myers and Jason Vorhees. Naturally a reasonable portion of the book is given over to Bradley’s experience as Pinhead and, as the book progresses, autobiography comes more to the fore, following his working relationship with Clive Barker, various theatre and avant-garde projects up to the making of Hellraiser and beyond.

Put in context it gives a greater understanding of the different tribulations the masked actor has to endure; the endless hours of rigid make-up, the early (4 a.m.!) mornings, the discomfort, the Noh theatre methods of getting into character. All throughout the book the sufferings of the art are re-emphasised by one actor after another – no-one can abide the sloppy lunches! Behind the Mask of the Horror Actor is a fascinating insight into a less well-documented part of the acting fraternity. Its easy going style (from factual details and biography to colloquialisms and anecdotes) coupled with personal experience and the technical details of the make-up process make it an essential all-round purchase for anyone interested in film, acting, horror or make-up.