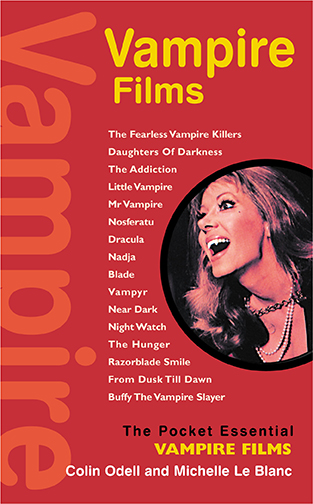 Vampire movies are almost as old as film itself. Constantly remade and reinvented for each new generation, the films, like the vampires themselves, adopt many shapes – from the faithful contemporary  adaptation of Francis Coppola’s Dracula (1992) to the art movie approach of Werner Herzog’s Nosferatu remake (1979] via the high-school horror of Buffy the Vampire Slayer (1992). This handy book traces the vampire film from its beginnings to millennium, acknowledging on its way all the classics of vampire cinema from the original Nosferatu (1921) up to 30 Days of Night (2007). From saucy French vampires to hopping Chinese ones, from Hammer horrors to Hollywood blockbusters, whatever your favourite bloodsucker you’ll find it here. If you want to go to the legacy accommodation of the whole Dracula saga you can see it reviewed here (also, shamelessly by us). You can buy it here
PinFacebookTweet
← BFI Akira Pocket Essential Tim Burton →