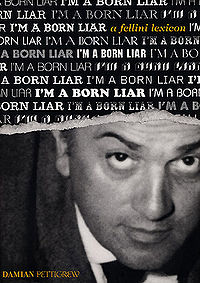 Fellini, that flamboyant idiosyncratic director of what’s now called ‘world’ cinema (i.e. anything that isn’t Hollywood… this seemingly includes much of the US cinema scene), has long been an inspiration for writers and critics of film art. Indeed there are a huge number of books available on Fellini, either directly or by association, and it’s hard to see what more could be said.

This isn’t even the first Fellini lexicon (the BFI’s has just been re-issued in paperback format). What’s more surprising is that this continued interest comes in an environment where precious little of the master’s work is available on DVD in the UK. The dearth of decent rep cinemas outside London has done little to help. Does the fascination derive from nostalgia for ever-aging connoisseurs of world cinema gazing on the Halcyon days of the 60’s and 70’s? Or is the concept of Fellini, Fellini the brand name, enough to pique widening interest in a way that, say, Marilyn Monroe or James Dean are icons to far more people than ever bothered to watch their films?

Whatever the reason we are faced with another Fellini book, “I’m A Born Liar”, the title itself one of Fellini’s typical contradictory statements – how can one admit to being a liar without telling the truth? Damian Pettigrew’s book is based upon two extended interviews covering every aspect of Fellini’s life and work, each session lasting a gruelling but undoubtedly fascinating eight hours. Rather than document these interviews chronologically, Pettigrew has grouped them thematically and alphabetically. Presumably this weeds out the chaff but also allows Pettigrew to take a more selfless backseat, interjecting only to provide clarity and flow. Fellini himself appears more than up for the task at hand freewheeling from lengthy details about pre-production to anecdotes to aphorisms.

This at times exhausting melee of art and artifice is the core to his best work, his argument that his work is resolutely non-intellectual, a typical conceit that bears little resemblance to the finished results. Flamboyant, witty yet showing signs of insecurity and angst Fellini is as open as he is defensive. From the flippant (“God may not play dice but he enjoys a good round of Trivial Pursuit every now and again”) and the surreal (dreams of Picasso making him omelettes), the moving (his brief epitaph to Nina Rota) and the insightful (the genesis of some of his most beloved projects) Fellini Lexicon has plenty to enjoy either as a straight read or to dip into.

The book itself is handsomely illustrated and while some of the colour pictures look a little out of place stylistically the neat ‘ripped corners’ and overall layout make this a treat to flick through. Unfortunately the double spaced text and character marked paragraph breaks are irritating and make some of the longer sections (particularly the introduction) hard to read, but these are minor quibbles about what is ultimately . . .