Treasure Planet (2002) A popular method to get new mileage out of earlier stories is to add “in space” to the end of them. 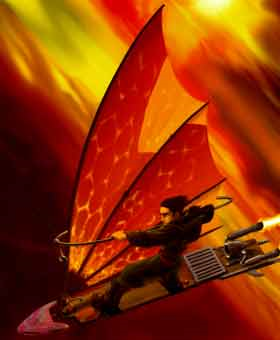 Event Horizon – it’s Hellraiser… in space. The Forbidden Planet – it’s The Tempest… in space. Star Wars – it’s The Hidden Fortress… in space. And so Disney gets in on the act with Treasure Planet. It’s Treasure Island. In space. Now this is going to be sacrilege to purists, but in fact the whole thing works rather well. Stylistically the anachronistic mixture of technology and swashbuckling shiver me timbers galleons makes for excellent eye-candy with the added benefit that these ships travel in three dimensions. Disney have used their technical skills and financial clout to seamlessly blend CGI with traditional cell animation with, at times, truly jaw-dropping results. The first encounter with the space port starts out as what appears to be a crescent moon in the sky slowly filling the screen with its bustling port-town nature, swarming with vessels of all sizes.

Our hero Jim has always been fascinated by tales of Treasure Planet and its loot of a thousand planets plundered by a notorious space pirate. He has, however, grown up into the quintessential disenfranchised youth, a slack cyber-boarder in trouble for minor misdemeanours by the local robocops. The reason for his malaise is that old Disney favourite, the loss of the parent. In this case Jim’s father left Jim and his plucky guest-house/restaurant owning mum to fend for themselves. Adventure comes Jim’s way when Billy Bones croaks his last and Jim is left holding a sphere containing a map to Treasure Planet, a map which is, naturally, of some interest to a number of unscrupulous parties. It’s not long before Jim’s aboard ship and off to the stars, unaware that the scallywags on board have mutinous intentions.

Treasure Planet is good unadulterated fun. It only has one in-film song, a good thing, and for once the action doesn’t just stop when it’s playing. The twists on the book are, in the most part, witty and well done – Long John Silvers parrot becomes a mute morphing blob while the crew are a bunch of alien odd-balls of varying degrees of unpleasantness or silliness. Best of all is Emma Thompson’s feline captain with her carrot and stick approach to management and an astounding arsenal of archaic and flowery vocabulary. On the negative side you do have to put up with the irritating Robin-Williams-in-Aladdin style hyperactive robot Ben but fortunately he doesn’t make an appearance until well into the film. In the meantime sit back and bask in the set pieces – the supernova sequence is quite simply astonishing, if incongruous.

While it’s unlikely to make anyone’s top ten list for 2003, Treasure Planet is good, solid family entertainment aimed at perhaps a slightly older audience than more traditional Disney fare. Perhaps this goes some way to explaining the films lacklustre box office performance, a real shame because in the past few years Disney’s deviation from its dreary 1980’s template have produces some really solid films.