… except this time round they missed out on the police training and met up to fight crime for millionaire boss Charlie who keeps in touch by regular phonecalls via the inscrutable Bosley. This time they’ve got a humdinger on their hands, a piece of software that can fingerprint voices and pinpoint anyone, anywhere using a satellite phone has been appropriated by the sinister Red Star clan. The engineer behind the program, Knox, has also been kidnapped and it’s up to the Angels; Natalie, Dylan and Alex to get both him and the software back into safe hands. 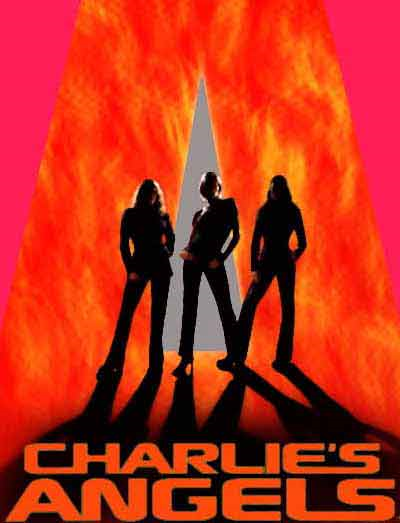 Seventies retro mania reaches its logical conclusion with an update of the iconic US series Charlie’s Angels. The show’s confusing blend of outright sexism (Charlie himself the unseen patriarch handing orders to his women while being surrounded by half naked bathing beauties) was tempered with the empowering figures of three women who could more than easily stand up to any heat. For every accusation of the women being exploited as Charlie’s playthings there was the counter argument that all the men in the series were ineffectual compared to the might of the Angels – it was they who could think on their feet and with their fists. So now we find ourselves in the post-modern Noughties, a land where Hollywood has allegedly purged the un-PC spectre of the Seventies when in fact all that’s happened is that the focus has shifted a bit. Charlie’s Angels has done big bucks in the States so, how does it stand? Well, for fans of cheesy sexism, body suits zipped down to the navel and chicks who get their guy by the swish of their hair in slow motion you’ve found your film, all elements present and (politically in)correct. For those of you who prefer a feisty heroine that can seriously kick butt, jump out of planes and survive humungous explosions with n’er a scratch you’ve also found your movie. Charlie’s Angels manages to be true to the spirit of its forebear but this isn’t the world of Seventies action television, this is Hollywood action cinema, and for that to succeed you need to be loud, big and very stupid. Fortunately Charlie’s Angels manages to be all three but director McG manages to throw in as many visual references as he can get his hands on. Drew Barrymore is Hollywood’s Ms. Post-modern and this is another vehicle to propel that image. From the opening pastiche of Bond films (with a nod to Mission Impossible) including a faked long shot and some outrageous special effects and stunt work the film gets into the swing with a widescreen pastiche of the original programme, complete with dayglow colours, silhouettes and a welcome return to split screen (long absent outside of Brian De Palma films or Boogie Nights). If the pace then slows down a tad it’s due to the sheer enjoyment of these opening minutes. There are nods to virtually every camp Seventies film from Private Benjamin to Saturday Night Fever, Shaft and even The French Connection. More up to date though is the reliance on The Matrix to advise the madcap wirework martial arts sequences and a flashback slow-motion bullet time sequence as well as MI2 posturing and crashes. Fortunately the effects of a Tom Cruise lead and a studio PG-13 requirement have not dampened the squib here. This is the Angels’ film pure and simple, while Murray makes an ideal Bosley he is little more than the damsel in distress to the Angels’ knights in shining armour.

Yes it occasionally pushes the boundaries of taste (when the three first indulge in a major punch up the soundtrack blares out The Prodigy’s “Smack My Bitch Up”) and the plot twists are Hannah and Barbera signposted (“I’d have got away with it if weren’t for you pesky Angels” you could almost hear the lead villain say, who is by the way… ah but that would be telling) but its got thrills, spills, car crashes, explosions, computer gobbledegook, daring missions, cunning disguises and dumb jokes. Best no-brainer popcorn movie of the year by far; the car stuff is better than Gone In 60 Seconds, the missions more impossible than MI2 and the martial arts more striking than Romeo Must Die.